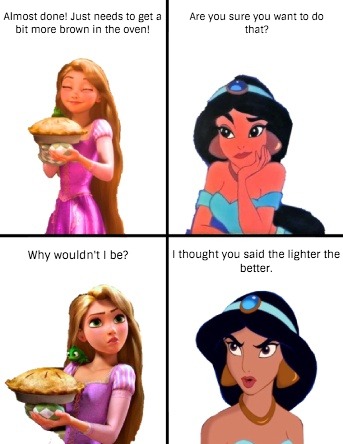 For my visual essay I would like to make a humorous image that women of color can relate to. I would like this to be my audience as my essay was about colorism in South Asia and how rooted it was within culture so to have an image that pokes fun at it would serve as a visualization for how silly the whole concept is. The primary characteristics of South Asian women subjected to colorism is being aware of the problem and how prevalent it is in society. I believe my medium of having it be a meme would be more accessible to my audience since the individuals most likely to see it would be younger demographics. The older generation of South Asians are the ones who participated in and helped carry forward the unfair system and so it would be more reasonable for the meme to adhere to younger individuals. I anticipate my audience to feel humoured by the content as the meme is it is meant to be ironic. I chose to have the Disney Princess Jasmine be the spokesperson representing the audience as it is the only brown skinned princess and so many desi girls feel like they can connect to her and look up to her as she represents the South Asian community. I would like my audience to feel that they’re not alone facing this issue and that many can relate to being subjected to colorism. I hope that by making the matter less serious in its form, the impact of hearing prejudice comments is lessened.

Need help with the Commons? Visit our
help page Send us a message
Skip to toolbar

Built with WordPress Protected by Akismet Powered by CUNY